Ballad of MadC: artist and visionary

Singularly brilliant. Artist MacC. She looks like a normal human. But what she puts on canvasses around the world looks like it came out of a superhuman.

The Berlin artist is doing her first West Coast show, called “Over the Edge.” I met her today as she was preparing and pulling the show together at San Francisco’s
1:AM Gallery. Here she is laying out giant pieces of signature MadC pink vinyl across the floor using the gallery as her canvas. They looked like super tight pieces of post-modern Colorforms.

Posted in Art, Artists and their brushes and palettes, Graffiti art, San Francisco

Do you know Olivia? In the world of popular art and culture, Olivia De Berardinis one of the best  interpreters of the female form. Sure, a lot people do the same thing, it’s just that Olivia does it the best. Marilyn Monroe, Bettie Page, Dita Von Teese. But those are just ‘some’ of her well-known subjects.

I sat and talked with Olivia about her creative process. Olivia told me she’s more fascinated by the mess around the painting than the painting. Ultimately, she’s bored by the finished piece and hypnotized by the process strewn about her work table.

“It’s like being in a candy store,” said Olivia, “the colors swirl around your head.”

“Then you come home and there’s one piece of candy in your hand, it’s boring. I love the splashes, they have so much more life to them then the painting. And the brushes. It’s the promise. It’s like being in a chemistry lab and things are bubbling. The bubbling is exciting. But when it turns into a little pill, that’s just not the same.”

Posted in Art, Artists and their brushes and palettes, L.A.

The Hidden Meaning of “Fragile” Music

My friend’s four and a half-year-old daughter always wants to look at things in my room. She’s not allowed to come in without my permission, so the off-limits zone is mostly likely, enticing.

The other day she was given permission and gleefully wandered around before stopping by my internet radio and listening. “Hey, what’s the fragile music you’re playing?” I was listening to classical music, the only thing I ever listen to on my internet radio. “What do you mean?” I asked her. “Why is it fragile?”

“There aren’t any voices, it’s just music playing, so it’s fragile.” Well, I didn’t ask for her definition of fragile. But I couldn’t get this new term for classical music out of my mind. Coincidentally, I went to the symphony that very evening and ended up OD’ing on a dose of profound fragility.

I listened in awe to the Warsaw Philharmonic Orchestra and its conductor Antoni Wit complete its American tour with the Russian virtuoso Yulianna Avdeeva, who performed Beethoven’s Piano Concerto Op. 73 on a Steinway grand. According to Avdeeva, the Steinway was “tuned to 442.”

I kept thinking how fragile Beethoven’s Emperor is, how fragile Avdeeva is (she rarely pedaled on the Allegro — only immortals can carry that off!), and how fragile a 442 tuning is. In fact as the remarkable night wore on, I realized the pantheon of classical music greats and classical music in general, is fragile. It’s all very fragi-cal music.

At the Broken Record, a pinup is born

Just east of Mission at Geneva, lies a whiskey bar called the Broken Record. It’s sure dark in there! But the cuisine in the back room is illuminated enough to have pulled in Food Network’s Guy Fieri to check out why patrons get hysterical over the off-the-charts fare.

Jason King’s owned  the Broken Record for 5 years. And for those 5 years, he wished he had something on the dismal, entryway wall. But as he told me: “I just didn’t know what it was.”  Well, that’s where master muralist Mark Bode comes into the story.

“I chatted with him one night and told him I was a painter,” said Bode. He showed Jason his work and rest is pinup history. Jason gave Bode a wall and he decked it with a seductive redhead lounging atop the front room archway. Done in the style of pinup greats like Vargas, Elvgren and Olivia, the bar now has a righteous  piece of pinup. [And she’ll always be close to Guy Fieri’s “Guy Ate Here” stencil. Guy’s head is well situated over her lusty thigh.]

Posted in Art, Artists and their brushes and palettes, Food, San Francisco

Gaping mouths. None of us standing at the middle of the Golden Gate Bridge could believe it when the Space Shuttle Endeavour circled around Alcatraz and started heading back towards the bridge. It had already flown one low pass parallel to the entire span. But there it was, heading straight for the middle, a 747 punt toward the bridge’s orange goal posts. 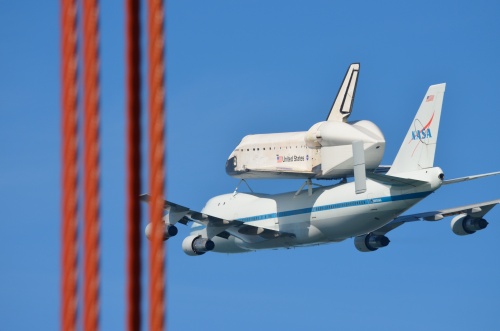 What’s it like on the twin ship lollipop? It’s like the Brazilian born, identical twin artists, Os Gêmeos. I watched (in awe) while Otavio and Gustavo Panfolfo worked as one unit, one brain , one dream, one heart — creating this painting in my friend’s back yard. What strikes me about this photo is each twin using their right hand to fill in, and the two arms of the painting, already filled in, are staring back. It’s a  deconstructionist’s dream.

I asked Otavio about their twin creative process and he simply said:
“We are the same.”

Posted in Art, Artists and their brushes and palettes, Writing

In the 80’s I was in the band Têtes Noires and we had this really cool song called “Moonies” which was all about Rev. Sun Myung Moon’s and his followers, the ‘moonies.’ I’ve actually been working on a a remix of the song and the album it came from (American Dream). I’ll be releasing it soon.

Since Rev. Moon passed away last Monday, September 03, I thought it was the perfect time to ask the song’s lyricist, Jennifer Holt, what she remembers about the birth of the song. Here’s what she said:

It was the mid-80’s and Rev. Sun Yung Moon was everywhere in the media it seemed. In Minneapolis, suddenly people appeared on busy street corners selling flowers. Curious, I asked where the money went, to one of the vendors. He mumbled something unintelligible under his breath. More curious, i started asking around and found out they were all acolytes of Rev. Moon, or ‘moonies.’ Then there was the mass marriage on television, in which thousands of his followers came together and were randomly married by him. Now that’s one powerful cult. As any good cult leader does, he was also famous for being ‘given’ massive bank accounts and inheritances by his followers, who would then do whatever he asked them to do to provide for the ‘family,’ including selling flowers on street corners. Now that’s some kind of charisma. Why is it people join cults? Are we so disenfranchised that even this is preferable to the bone-chilling aloneness that many of us suffer from, as we make our way from dysfunctional families where we did not learn how to connect or attach appropriately, into a cold, uncaring world? Enter Rev. Moon, a hand outstretched for one’s heart, brain, and of course wallet, in exchange for community.

Lyrics for “Moonie” by Jennifer Holt
Recorded by Têtes Noires, 1984, from their album “American Dream”

Posted in Music, The lives they lived

Seat mates: Please dear god, not again with the ice! 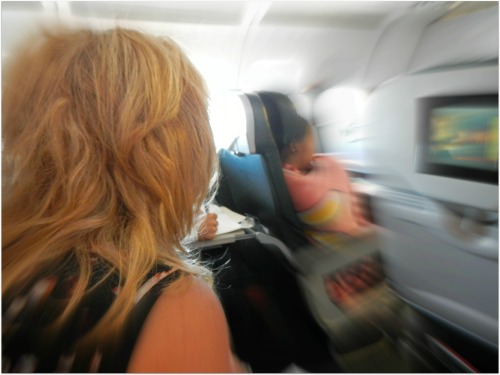 Oh airplane seat mate, when will this flight be over?

(Reader discretion is advised) :
Looking back on some of my worst airplane seat mate experiences, few could top that of a woman I once sat next to who repeatedly dug her hand into her crotch. No, it wasn’t what you think—it was something else (I think?). Still, crotch digging is crotch digging any way you look at it … or try to look away from it … or try very hard to get your seat changed.

Recently, on a warm, early morning flight from west to the midwest, I had a different kind of doodler sitting next to me. Meet my seat mate and a list of all the irritating and neurotic things she did. I finally had to put my hood up (my hood acting like a horse blinder) and block her out:

No more, I can take no more. My hood is up, I have turned slightly askance. I can breathe again. That is, until I hear these dreaded words from our stewardess: “Can I get you anything else to drink?” (Can you bring me a valium?) 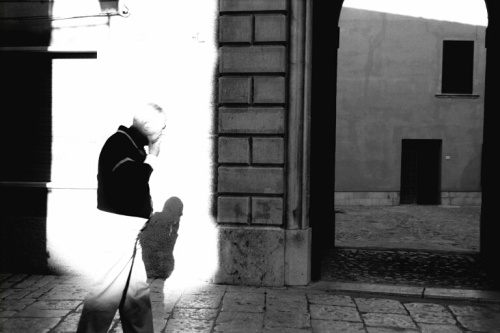 I was hypnotized by the play of light and shadows, hoping someone or something would walk into the context, which did happen. The man’s  profile casts a silhouette on the wall, making it feel more intimate, yet apart, like a spirit.